The SX70 and the Marketplace

If you're visiting this blog then you may already know that Polaroid SX-70s have made quite a little comeback in the last 2 years thanks to the folks at the Impossible Project developing new film. You may have searched for your own camera online but didn't know what to look for or couldn't tell the difference between certain models. There are some great technical reference sites like here but I'll try and run down some basics on what to look for and the difference between what's good and bad. Remember, this is a bit on the subjective side of the sales spectrum and strictly from my general observation of online sales. There's a ton of different models but these are what seem to be the most popular:

Model 1 - This is the iconic Polaroid SX-70 and prices are all over the map. It never really said "Model 1" anywhere on the camera but it's what it's commonly called... just guessing because it was the first model. Just guessing. There's millions of these out there and a lot still work. First year models didn't have the split-lens viewfinder and are REALLY collectible. I don't think I'd ever reskin one of those regardless of the condition. My experience with the Model 1 has been hot or cold. I've received so many different models in different conditions but I'd have to say about 20% of Model 1s I get end up in the "parts" pile. Frustrating right? Imagine how frustrating that can be to a first time buyer. Something interesting to note about the Model 1s is that they don't work well with electronic flashes. I've noticed that best results can be achieved with good ol reliable flashbars. Shots with electronic flashes on the older style shutters (see below to tell the difference) come out really dark.

Alpha 1 - This seems to be the grandaddy of sellers. Folks will pay a premium for an Alpha 1 in great condition and rightfully so. It's a gorgeous camera. The dull metallic plating hides a lot of blemishes and it features the later style "hybrid" shutter systems that allows for flash fill and more accurate programmed exposure times. I've found an easy way to tell if you have the hybrid shutter is when you open the film door and find where the shutter assembly attaches to the body the hybrid shutter will be attached with a flex circuit ribbon. The older style shutter assemblies (which were actually solid metal) were connected with what looks like a bunch of wires wrapped in a tight spring. The Alpha 1 also had a tripod socket and recesses on the back bottom cover where a strap could be attached. I've seen more and more sellers calling a Model 1, "Alpha 1". Make sure "Alpha 1" is written on the film door shield plate.

Model 2 - This is a really cool camera because it's like Gene Simmons without the makeup. These models were an attempt at reducing cost by removing the plating and using lousy PVCish (porvair) panels. Why is it cool? It's white/ivory. Something you don't often think of when SX-70 pops in your head. Because of being "different" and having a bit of a contemporary color scheme, these can go for a nice chunk of change, especially if the porvair is in good shape.

Model 3 - I constantly find myself defending this camera. Purists will turn their noses up at this camera saying "It's not an SLR! It's not an SLR!" and this will turn away the novice SX70 buyer. True, it's not an SLR but it's capable of taking the same quality pictures as an Alpha 1 once you get the hang of it. Polaroid's final attempt for saving some bucks on the folding SX-70 cameras led to removing the hooded SLR viewfinder and replacing it with a HUGE viewfinder lens perched on top of the body. It's like cokebottle glasses on a kid. The disadvantage to this is no longer could users focus via the camera's lens but now had to "ballpark" their shots and guess the distance of their subject, something a lot of people may have found next to impossible after five highballs at a super swingin party. Why defend the Model 3? It's a little tank. I have yet to receive one that needed extensive repair. The lens is no different than that on other SX-70s and there were less parts to break.

Sonar - Beleive it or not, the Sonar was one of the most expensive cameras to purchase of all Polaorid cameras in the late 70's because of the autofocus technology. This is a very misunderstood camera as there isn't much information about how it truly differs from more pouplar models but there were a lot of variations (Onestep, Time Zero, Model 2 AF, SE, etc...). First turnoff to buyers today is that GIANT Notre Dame Cathedral window at the top of the camera. It looks very awkward and it strays a bit from the old school aesthetics that Model 1 had. Truth is, the Sonar has EXACTLY the same quality and capabilities of an Alpha 1. The cameras are identical, shutter/finish/function, with the exception of the Sonar having that huge forehead and black panels. Ever notice there was never a Sonar Alpha 1? Bingo. The autofocus mechanism itself is an entirely different animal however. One minute it can work, the next *kaput*... and it can be very frustrating to use the manual mode with no split-circle viewfinder. With the higher demand of Alpha and Model 1, I'd anticipate this to be a more sought out model in the near future. I love working on these... Its so rewarding to hear the enthusiastic whir of the autofocus motor come back to life :).

SLR680 - Whenever I see this camera, I think of Darth Vader. It's kind of intimidating to see all theat technology stacked on top of another piece of technology forming a giant wall of... technology. This was one of the only folding integral cameras to use 600 type film, the SLR690 being the other. Again, exactly like Sonar models but with a very convenient electronic flash built in. Becasue of this and the fact that there still is some good expired 600 Polaroid film out there, this is a highly desirable model and will fetch a premium in good condition.

I'm sure I've missed a lot about each camera but I like to keep it short and my fingers hurt. Plus the keyboard's "s" sticks and I have to keep correcting my typing. These are some cool things to know about the more popular SX-70s and why they're priced the way they are. It's been said time and time before from myself and others, make sure you buy a "film tested" camera with a guarantee and warranty (Hey, 2nd Shot does that! - /plug). There's nothing worse than getting a "new" camera and having it spit 24 bucks of 8 frames of PX70 film all at once because of a broken coupler. Ask me how I know... ;)

So here's a few shots for this evening... First is the final stages of all 2nd Shot cameras before being shipped. They get a final polish (fingerprints = bad), final shutter check (that's for my own sanity), and a burst of some duster, then packed tight for a safe trip to their new home. 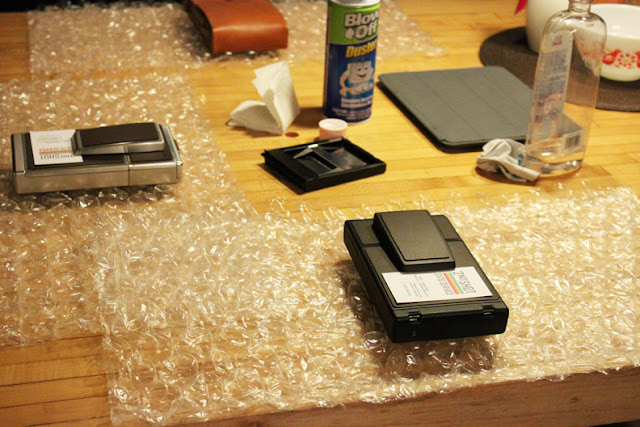 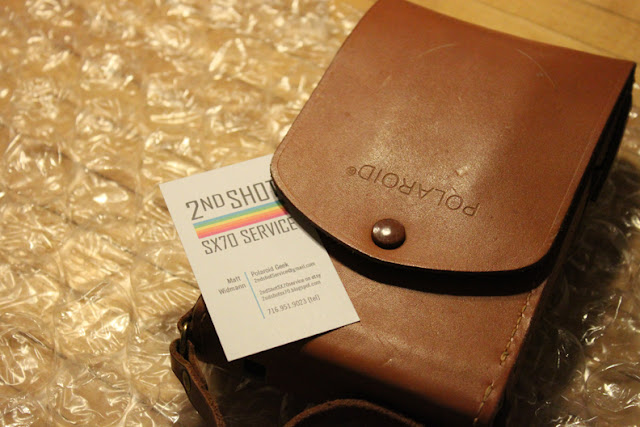 And finally, little things like this make us all sorts of giddy. Here's a case of MINT SX70 flashbars. I'm going to add one to each of our next round of sales. So cool. My man is ROCKING that moustache! 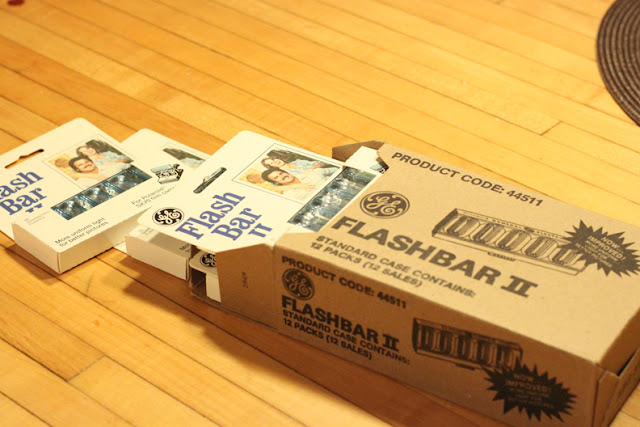