SHAME! Shame on me… shame on me a million times. I haven’t been posting like I meant to the past few months but I’m still here and still gladly accepting cameras for repairs. I’ve even found the time to post a few for sale here and there. In fact, this is the most steady amount of cameras I’ve had in quite some time – on average 3 cameras a week. I’ve also been building a new portfolio for my artwork. Times are a changin' and I need to be prepared to pick up and “go” at any time so I’ve been dedicating some more afterwork time developing and maintaining my artsy fartsy skills. Add a day job on top of that and weekend travel, that leaves about 8 hours a week for me to turnaround cameras. I’m not complaining at all though. It keeps me out of trouble… :)

I had some time to go through my inventory and see what I have as far as parts and donor cameras go and I realize that I’m getting low on a lot of common needed components. The 3 most common parts that I use right up are lenses (half of the submissions I receive are coated with fungus), motors (time takes a toll on these suckers… most can be reconditioned), and sonar assemblies which I’ll focus on in a bit. When I first started doing this repair gig as a hobby I’ll admit I had no idea what I was doing or how to efficiently go about a repair. If the autofocus wasn’t working, the natural thing to do would be to strip it off of a donor camera and *blam*… good as new. Well now I have all these components that have been stripped off of several other cameras and I can no longer just swap assemblies because even trying to find a good donor anymore is a hair pulling experience. So the next step would be to buckle down and learn how to properly repair a specific problem with the AF. I’ve been doing this the past few weeks… relying a ton on my multimeter and troubleshooting charts.

Most of the Sonar cameras I receive for repair have a common problem - they all only focus only between 3 and 5 feet. I’ve had one that just coasts… it can’t settle on a specific distnace, and I’ve had a few that jump their focus directly to 10.4” (also known as ringing). Those two were relatively simply fixes that require adjustments. However, the 3 – 5 feet only problem requires sleeves rolled up, music cranked up loud, a non-shakey hand, 3 hours of spare time, and a HUGE pile of patience. There’s a little component known as the “pick-off” or it could also be called the encoder sensor. This part essentially “counts” the number of holes on an encoder gear as it quickly rotates. The transducer sends off a “chirp” that bounces off the subject back to the camera and tells the gears to set in motion… the pickoff counts how many revolutions the encoder gear has turned and based on the subject’s distance, determines where the gears, in relation to the focal distance, should stop… now focused on the subject. I’ve gone crosseyed thinking about how this works but let’s just say the repair manual does a much better job describing the theory of operation.

Long story short (too late), these pickoffs can go bad after time and need to be replaced. I performed this procedure last night and I’m very happy to say it was a complete success!! Pickoffs can be tested on their own using a multimeter and I found that I have a ton of them in my parts bins. The transplant required quite a bit of disassembly of the Sonar components in order to unsolder the 4 wires that connect to the PCB board so having a good solder workstation is a must for procedures like this. I couldn’t imagine trying this with my 15 dollar Radio Shack iron. Reassembly was the biggest pain as the gears need to be held in a particular spot in order to secure the lever arm that adjusts the flash tilt as well as maintaining proper focal calibration. So there's a new repair that I can advertise!

*phew* I want to keep writing but I’m breaking my own rule that there should be more pictures than words. So I’ll just add that I also found a decent remedy for overexposed prints by removing corrosion from the photodiode located on the back of the shutter PCB board. Removing the corrosion allows more light to the photodiode which results in faster shutter speeds and less light being allowed for exposure. So now I’m trying to make it a habit to check the photodiodes for each repair. Although it’s more work and in some cases, with older cameras, there’s risk of delaminating a board it’s worth it in the long run knowing the camera goes back to the customer working properly.

We currently have 2 cameras up for sale on Ebay. Check em out sometime! OK… I’m done. Shop’s closed!

Here's a shot of the pickoff replacement in progress... final assembly is shown in the diagram. 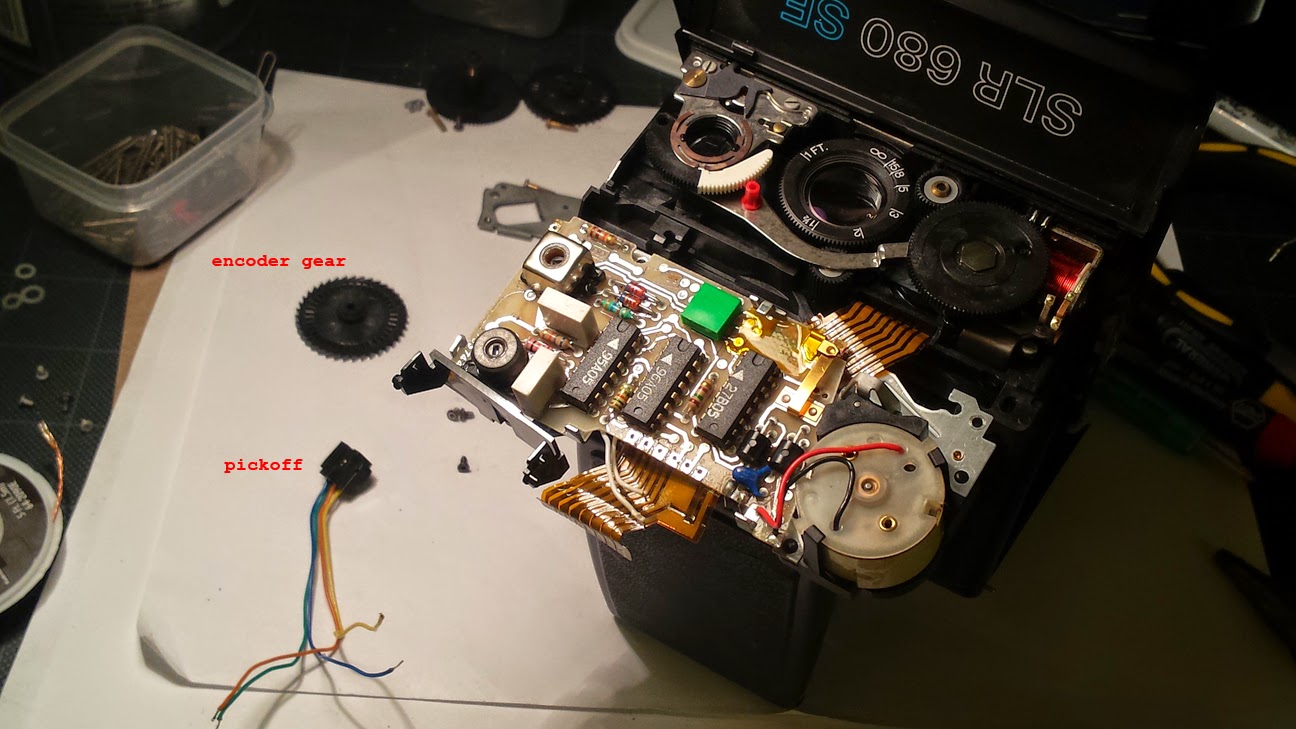 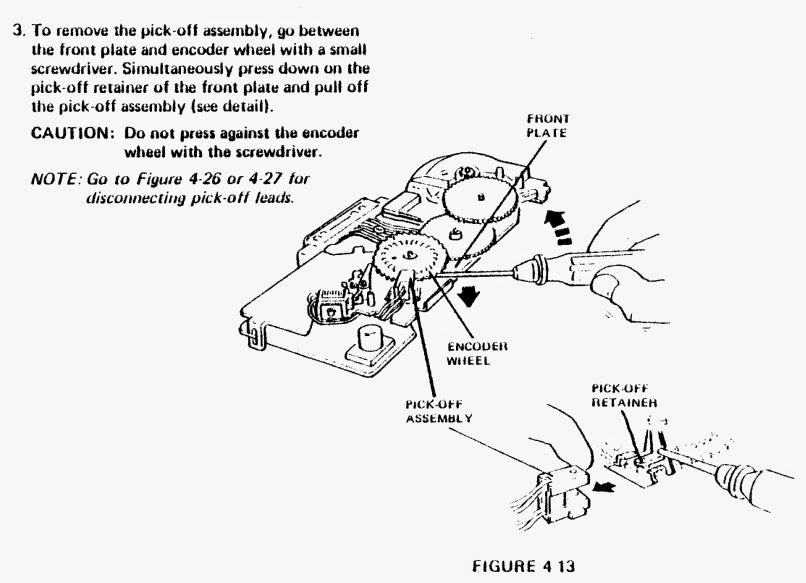 Before and after of the photodiode cleaning...

These cameras are currently for sale and are in need of a good home! 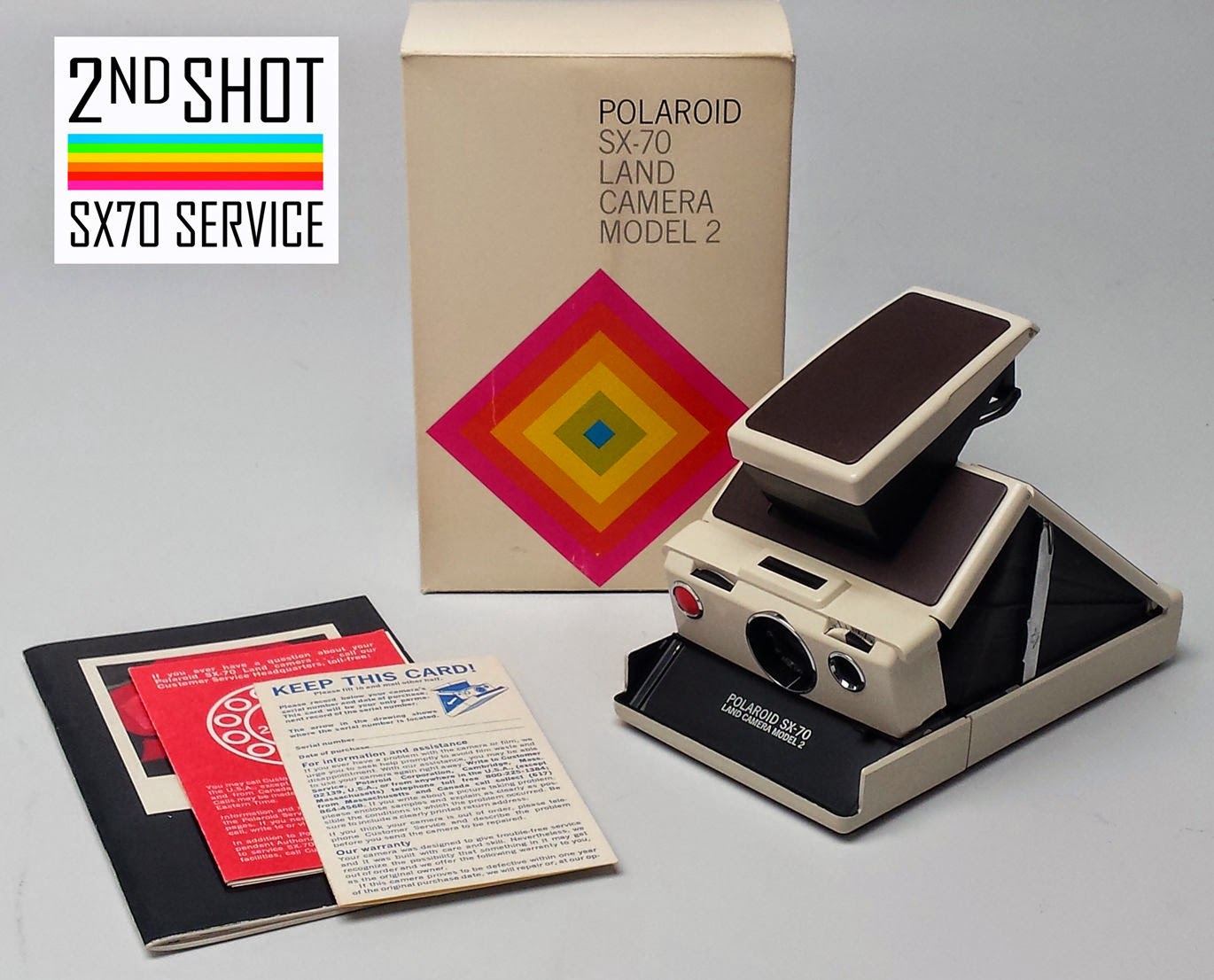 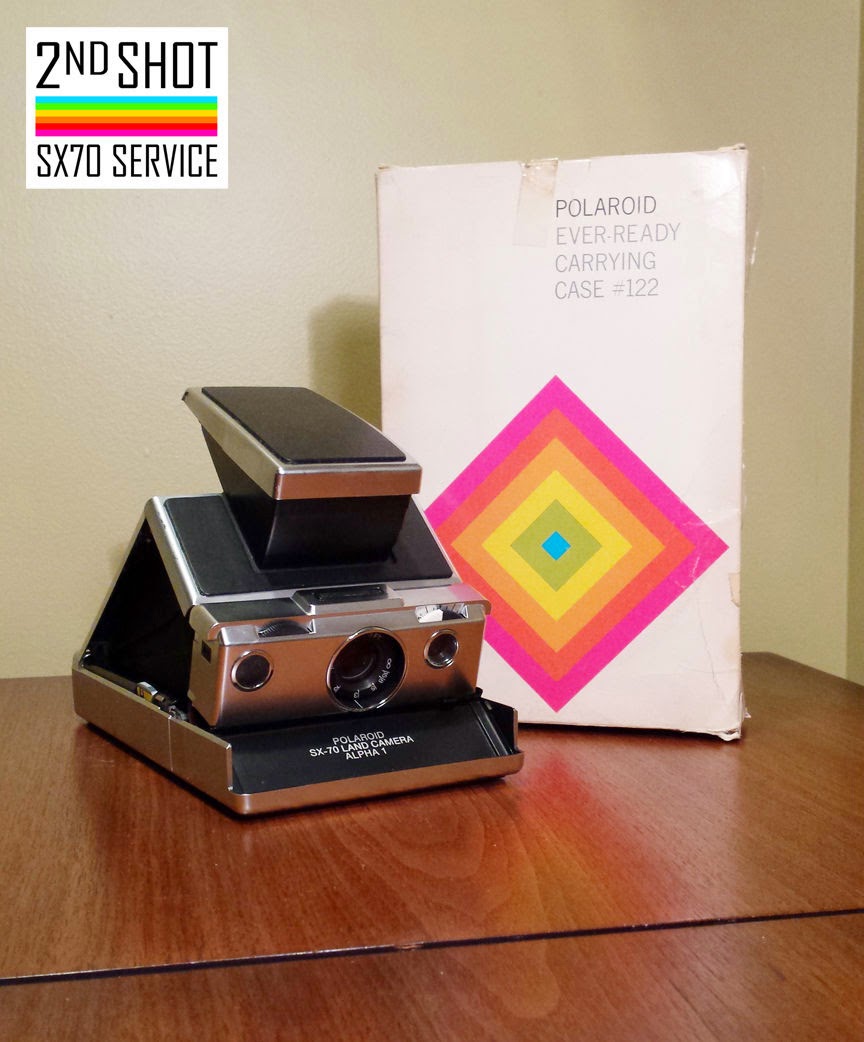