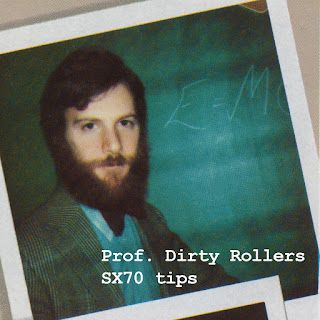 In an attempt to post on this blog more often, I’m going try a new weekly segment offering basic tips and ideas primarily from the manual “How to Take SX70 Pictures” published by the Polaroid Corporation in 1974 (it was included with each SX70 camera purchase back in the day). You may have seen this booklet pop up a lot... it's not just filled with mindless banter and sweet pics of 70s facial hair. This booklet/manual, although very brief, has a ton of info that is definitely worth reading and revisiting to better understand the functional capabilities and limitations of the SX70 and what to do if there are any problems either due to camera malfunction or simply because of user error. There’s also some great general tips for composing shots and what to look for when shooting in various lighting situations. Although considered a user-friendly automatic camera, using the the SX-70 has a bit of a learning curve and a few functions take a bit of getting used to. So, on to tip #1! 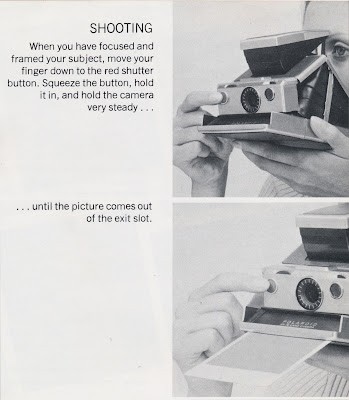 A common problem that is misconceived as a “malfunction” is simply part of the original SX-70 programming. Older Model 1 SX-70s (this also includes early Model 2 and Model 3) require holding down the shutter button for the duration of the cycle and until the print is fully ejected. If simply “jabbed” as the manual puts it, the cycle can be cut off, delayed, interrupted or the mirror can remain flipped up which keeps the shutter blades closed and you won’t be able to see through the viewfinder. Later Models (typically late '75 and up) including Alpha 1, Sonar variants, and 680/690 didn't have this issue. Users could simply tap the button and voltage was continuously applied. This blurb is from page 30 of the manual:

“IF THE CAMERA STOPS DURING A CYCLE

In rare cases, The camera may stop in the middle of an operating cycle because the motor is not getting enough power to continue. (When this happens, you may not be able to see through the viewfinder, or to close the camera fully)…

One is jabbing at the shutter button instead of holding it until the picture comes out. The remedy is simple - press the shutter button again and hold it. The camera should complete its cycle. If it does not, open the film door in dim light and pull the pack out about an inch. Push the pack in again and close the film door. The counter will reset to 10. The camera should complete its cycle, ejecting the top piece of film which will have been exposed and should be discarded.”

There’s other reasons for mid-cycle failures such as a dead or weak battery, but since this manual was written 43 years ago and these cameras are now glitchy antiques, there could be something else wrong with the camera (weak motor, migrating fresnel light baffle, shutter malfunction) and it’s best to send it in for a repair.

Here's what happens when simply "jabbing" the shutter button on a Model 1.

This shows normal operation when holding the shutter button during a cycle. Be like video 2.

It’s very important to note that if the camera stops mid-cycle, do not attempt to force close the camera! This can cause all sorts of things to break inside like the viewing mirror or the hinges on the flip-up fresnel screen… Not a cheap fix.