Hahahaha... I just wrote that title and did a spit take. That's really not what I'm calling it. Aren't we having fun? Pull up a chair, this might be a long one and I'm on allergy meds.

May saw a tidal wave of camera repair jobs and freelance design projects and June-July is looking to be the same. Needless to say I'm a bit overwhelmed so I've been updating customers that there is currently about a 6-8 week backlog and I'm trying to get to them as fast as possible. One thing I can promise is that I won't rush a camera. It's best to do it right the first time, each time, rather than have it shipped back to me, I then cuss at myself for the rush job I did, and then send it back hoping I fixed it... it's a bad habit to get into and I want each camera shipped back looking and working like new.

One of the many side projects I've been trying to cram in to my schedule is the whole SX70/Instax film pack idea. For those of you on Instagram, you've seen a few pics but I never really had a chance to explain it entirely because Instagram is all about pretty pictures and I like to post pretty pictures. So I'll try to explain what exactly this whole project is and why I'm beating myself up trying to do it.

My first reconnection with film photography was when I bought my first pack of Impossible film in 2011. To this day I'm a brand-loyal Impossible Project (now Polaroid again) customer hands-down. When ordering film, I order a three pack of 600 film first. Whatever money I have left over, it's HP5, Portra400, and then maybe, just maybe, I'll snag a pack of Instax Mini if I bump into it at Rite-Aid. I absolutely love what Impossible has done with introducing an entirely new market, as well as reintroducing to the previous one, to instant photography and they firmly believe in preservation of what many consider to be their favorite camera, the SX70. So when reading about this project, keep in mind that my intent has never been to replace TIP film in my SX-70 with Instax. The intent is to be able to use multiple formats in my SX70 while performing no modifications to the camera whatsoever.

This whole concept started when a few folks on IG showed off their Instax mini film used in different cameras. Very cool. I tried a few and it was fun but (permission to speak freely) a total pain in the ass. Only one shot could be exposed at a time, there was a lot of fumbling around trying to tape an unexposed piece of film to a darkslide, and the film had to be processed in a different camera. And all this had to be done in a changing bag. Pleh!

Here's a few pics I took with Square film in my SX70. I did a temporary capacitor swap and converted the metering to 800. All have been processed in an Instax 210. 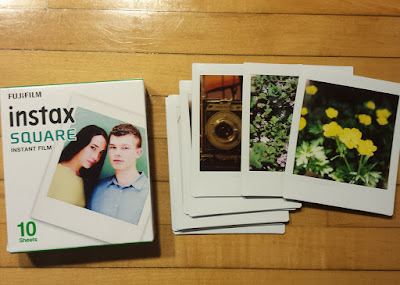 So what would it be like if my SX70 was a multi-format camera, much like the Yashi 635 (120 and 35mm). What if I could use Instax Mini, Impossible Project film, and now Instax Sqaure in my SX70 without any modification to the camera at all? That would be cool... I could do some more delicate portrait work or fine art influenced compositions with my Impossible project film. Or I could pop in some Instax and take random everyday shots or vice versa. There's pros and cons (all subjective) to both formats. Impossible film is a bit more expensive, but the resulting image is unbeatable. Instax film is cheaper and more readily available but lacks the soul that you can get from Impossible film. Impossible film is expressive while Instax is convenient. There certainly is a common middle-ground but wouldn't it be great to use both films in the same camera?! Hell yes it would!

Here's a few early sketches for a mini-pack concept (before Square was officially announced) showing the adapter pack, film door, and daylight loading mechanism to transfer Instax film to the adapter pack. 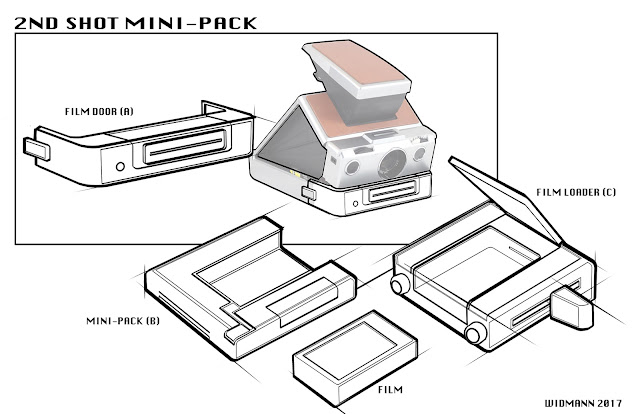 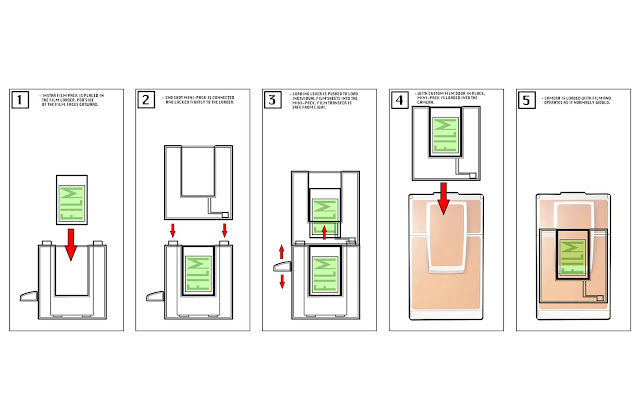 Here's my thought process for the project. If I can't really explain this that well in words, then I'll be posting some drawings and 3D development soon. Plus I suck at staying on-topic and lack organized thinking.

- The mechanics and dimensions of the SX70 are not compatible with Instax film packs.
- Instax film is rated ISO800 while the SX70 is designed for 125.
- Instax film is exposed from the back of the print. Final images will be reversed.
- Instax cameras are designed with incredibly tight roller tolerances and the gearing is greatly reduced   to allow enough torque from a standard DC motor to pull the film through the rollers.
- Only one sheet of Instax film can be exposed at a time in an SX70 and a separate Instax camera is required for processing (see next bulletpoint). All film must be transfered from camera to camera in the dark.
- SX70 roller tolerances and roller spring strength are not tight enough to apply the correct pressure and evenly spread the Instax developer throughout the entire print. Undeveloped patches at the upper corners would be seen.
- Instax film packs don't have the integrated battery packs like Impossible packs. An external battery pack would be needed.

There's more but I can't think of them off the top of my head but you can see there's a laundry list of why this wouldn't work. But I'm a stubborn product designer and I like to think of ways to make this work. So me and a few others started brainstorming. Actually I just started babbling about it at the pub and a few of my buddies offered their .02.

What if there was a specialized film pack the same dimensions as Impossible's, in to which a user would load 10 sheets of Instax film, load into the camera, and take 10 consecutive shots just like they normally would? 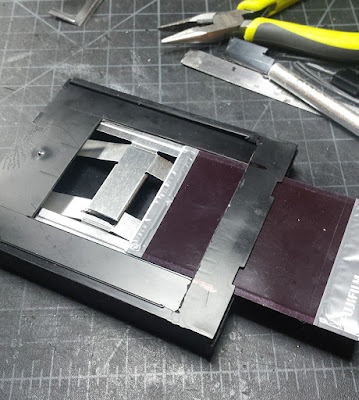 Addressing the loose tolerances of the SX70 rollers and my desire to keep the camera as original as possible, why not remove the SX-70 film door (it's really very easy to do... like really easy) and replace it with a newly designed door that contains it's own gear train, motor, battery supply, and delivers the print with the same torque and pressure specs to that of an Instax camera? 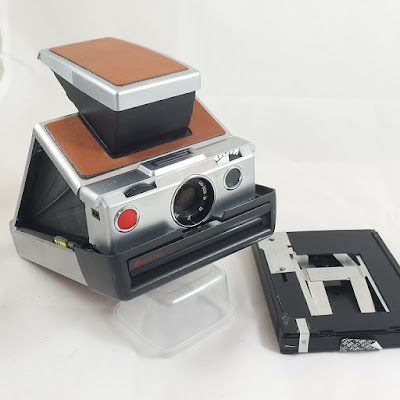 With a little help from one of my engineering buddies "bebeh" Kyle, we started developing this system. There's still a list of hurdles we need to get over but I feel like we're 80% to proof-of-concept. A few things we still need to work out:

- The original intent was to have this as a completely automated cycle. In other words, you press the shutter button and the camera does the rest... Just like Kodak used to say when people still used tooth powder and thought putting butter on a burn was the right thing to do. Problem here is the RPMs of the film door mechanism isn't the same as the RPMs on the camera. Speeding up the RPMs on the film door to match the SX70 drastically reduces the developer spread of the Instax film. And I broke my gear train on my SX70 due to the strain of trying to push the film sheet into ultra-tight rollers (luckily I know I guy that fixes these cameras. See? Having fun.).

To solve this, and for simplicity sake, it would be easy enough to move the rollers forward and let the camera cycle naturally without ejection. Then the user would push/pull a lever attached to the film door to mate the film sheet to the rollers. This lever movement would do two things: 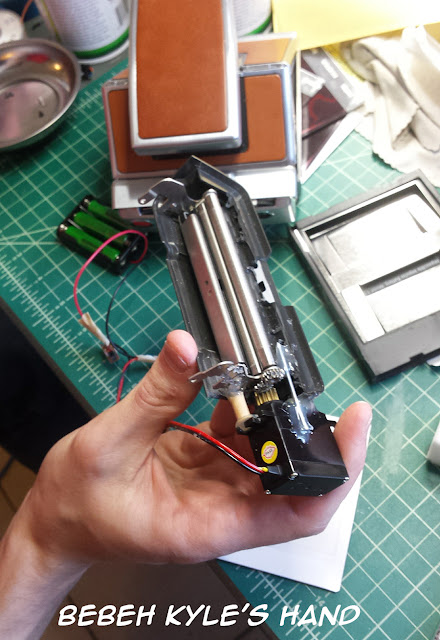 So essentially this would become a two-step process. 1. press the shutter button for exposure allowing the camera to cycle 2. push/pull the developing lever to eject the print. I think we're a patient enough group to look past the fully-automatic process in favor of something a bit more manual. Or we could say "screw you" to both methods and slap a big ol crank on there so we can GRRRRRRIND our film from the betwixt the camera rollers.

So, that's where we're at. There's a few things that I'd be willing to live with like a reverse image, the need for an ND filter built in to the adapter pack, and my biggest user-unfriendly gripe which is the user would need to load the film sheets in a darkroom. I have some ideas for a day-lab like mechanism that would take the film from an Instax pack and transfer it to the adapter pack (pictured above) but just thinking of the engineering on this gives me brain-fever. That'll be saved for later. Our last steps are to get the roller tolerances correct, document a few test cycles, slap a visual and 3D presentation together in case anyone (permission to speak freely again) with a shitload of money wants to take control of this project, and get back to repairing and selling cameras and drawing pretty pictures. This has been a fun project and I hope more like this pop up later on.

All this writing that I hoarked up on your screen has built up to answering my original question... why am I doing this? When someone would ask me that I would look at them just as a nine-year-old would after their dad busted into the room screaming "WHAT THE HELL ARE YOU DOING?!" after finding that child lighting hairspray (Aquanet to be exact) soaked explosive caps on the carpet. Yes that happened. I give that kind of blank "f-if-i-know" stare. I guess I just really like instant film and my SX-70 and I wanted to see if I could do it. It's a simple answer. :)


Oh, and the filthy money. I want to make millions and millions of dollars and sleep on a pile of money every night with a woman under each arm. #yeahright
Posted by Unknown at 11:09 PM