I'm currently 16 deep in the queue with a wait on a new shipment of skins so I'm taking an evening to post a recent repair that I finally finished. Sorry if this is a bit long but it's a really cool story...

The design/engineering process is never easy when coming to a swift resolution. There are pitfalls, setbacks, second guesses, delays, revisions, cost factors, engineering hurdles, last minute changes, deadlines, and a slathering of other things that you don't see coming. However there are times, like the one I'm writing about, when a few people get together and the stars align (#nopunintended) and the limiting factors become absent.

When I was first messaged on Instagram regarding an SX70 antique store find in Tennesee that had "the insides completely wrecked", little did I know that it would be from guitarist/vocalist Neil Perry of The Band Perry, the multi-Grammy winning country music group. "Oh." I thought... "That Neil perry?". Yes... that Neil Perry, also an aspiring and very talented photographer. Even better, who knew he's a Polaroid freak like the rest of us!?... and a damn passionate one too with a great appreciation for the format, the heritage, and the droolworthy gear. He also plays a mean mandolin and is a helluva nice guy.

The camera arrived in rough shape but with fantastic cosmetic potential. Overall a solid '74 but it was a rattler (broken viewing mirror), most likely dropped as both rear hinges were busted loose. There was also a hairline crack on the faceplate, the fesnel lens looked like it met Freddy Krugger, the optics were hazed over, the shutter solenoid was going bananas, and the motor sounded like mush. So it was agreed that this would be a complete overhaul/restoration.

When I spoke with Neil, one of his biggest concerns was that the skin remain original. In fact, this is a concern that most people express when they first ask about a repair and it's one that I've struggled with how to resolve as the previous supply of tan skins from Aki-Asahi had more of a yellowish hue and a brighter value than the original. Unfortunately, in this case they couldn't be salvaged. It's difficult for me to reply explaining that the original skin and foil sublayer can't be saved as they need to be removed to access internal components and become damaged when removed (Polaroid techs would simply replace the old with new stock - unfortunately no longer available). I dislike saying "I can't do it" or "this is all I have" so this sparked the initiative to contact Mr. Rikuo Nakamura of Aki-Asahi Camera coverings in Japan. Mr. Nakamura's products are well known for high quality fit, finish, and durability and are the go-to skins for hundreds of different models of cameras including the SX70. I was able to contact him with the request to see if he could better match the original color and texture of the SX70 and he enthusiastically agreed to work with his tanner to find a suitable leather and color. Fast forward a month and some change along with dozens of emails later and he nailed it on the first try (ok... I admit I was a bit concerned from the pic he sent of the new color but trying to judge colors from a shady phone pic totally sucks so I took the chance and ordered a handful of sets). The new skin definitely compliments the camera's original aesthetics and looks much more authentic. Very well done!

While waiting for the skins, Neil gave me the green-light to compile an SX-70 outfit that used some of the best of the original items made specifically for the SX70 camera. Key word - "original" - especially for the Pola-purist. If it doesn't fit the era, it loses the charm. This wasn't easy as there were some very rare items made for the SX70 that never went to mainstream sales or was only available in other countries but I was able to track them down. So we decided to fit the camera with the following:

Also sent by in by Neil for repair along with the 'rattler' was a very nice Polaroid 220. A very underrated camera in my opinion that can equally match picture quality of it's more famous brothers, the 250/350/450 and gives that faint Polaroid vignette look. A simple battery conversion and thorough cleaning/adjustment was all this 220 needed to have a new life. Special thanks to 2nd Shot's 'Dubbs' for retrieving and polishing up the original case to a like-new finish.

Needless to say, this was more of a project than a simple repair. Neil's passion for the SX70's design and keen eye for detail helped initiate the search for a better original SX70 leather which led to a very close collab between Aki-Asahi and 2nd Shot helping me achieve one of my goals to network with other businesses to help produce a better product. Funny how stuff like that works out. #win

So, many thanks to Neil, Mr. Nakamura, and a big shout out to www.joshuaweichman.com for saving another classic SX70. And best of luck to Neil and The Band Perry on their upcoming third studio release and current tour as well as Neil's photographic endeavors. Be sure to check out these links too!

OK... finally here's the pics... Enjoy! Stay tuned for more updates to where I'm at with customer repairs. I'd like to add a sort of real-time queue to the site somehow. Thanks for everybody's patience! Shop's closed!

This is the condition the camera was in when it arrived to the shop. Note the shattered viewing mirror and the rear cover hinges still attached to the chassis. #weep #sob 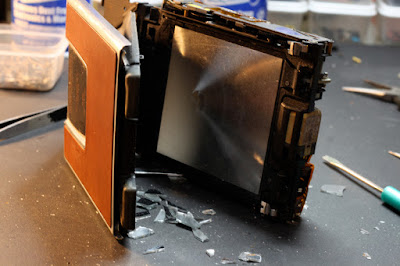 Here it is now! A gorgeous 1974 Model 1 SX70 restored to mint condition with improved skins and all the fixins and the 220 shown in beautiful original condition. Note: Pic 2 and 3 are taken with a stand-in Alpha 1 and pic 4 is of Neil's camera with the old skins. 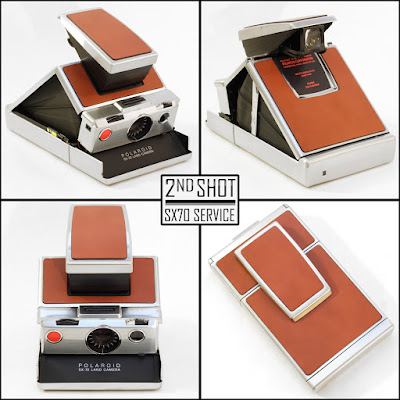 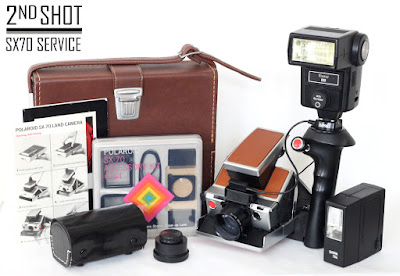 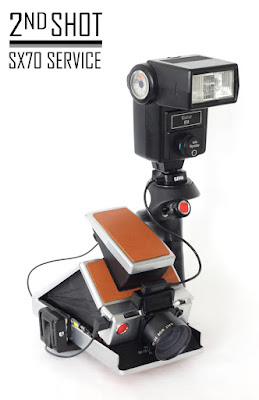 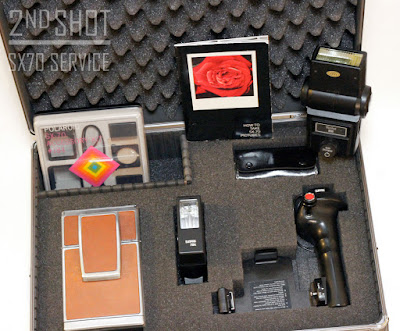 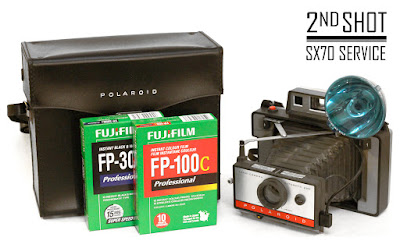